Wunderlist is a star among the list-making applications. That may not sound like a big accomplishment, but they’ve been helping people keep their lives organized with an easy-to-use, intuitive application. You can create to do lists from shopping and holiday planning to organizing your work timetable. One thing that has really helped Wunderlist to stand out is that you can collaborate with friends, family and coworkers. This helps hugely when you need that helping hand to get a job done. In 2015, Microsoft acquired Wunderlist and two years later they revealed the application was going to be discontinued. It hasn’t happened yet, however.

Is Wunderlist still the wonder list it once was?

‘Wunderlist’, or should I say ‘Microsoft To Do’?

Unfortunately for many, the Berlin-based start-up (‘6Wunderkinder’) sold Wunderlist to Microsoft in 2015, just two years after its release in April 2013. At the time they were bought out by Microsoft, Wunderlist had accumulated 13 million users. Their rocketing trajectory has slowed considerably since Microsoft announced it would be discontinued. That makes complete sense, but two years has passed, and Wunderlist is still available for download. Not only that, if the application is terminated Microsoft will release a warning and give you time to migrate onto their own application (‘Microsoft To Do’) or find yourself another. There’s no doubt the news is a negative but you can still get some use out of it, and the app may never be discontinued. 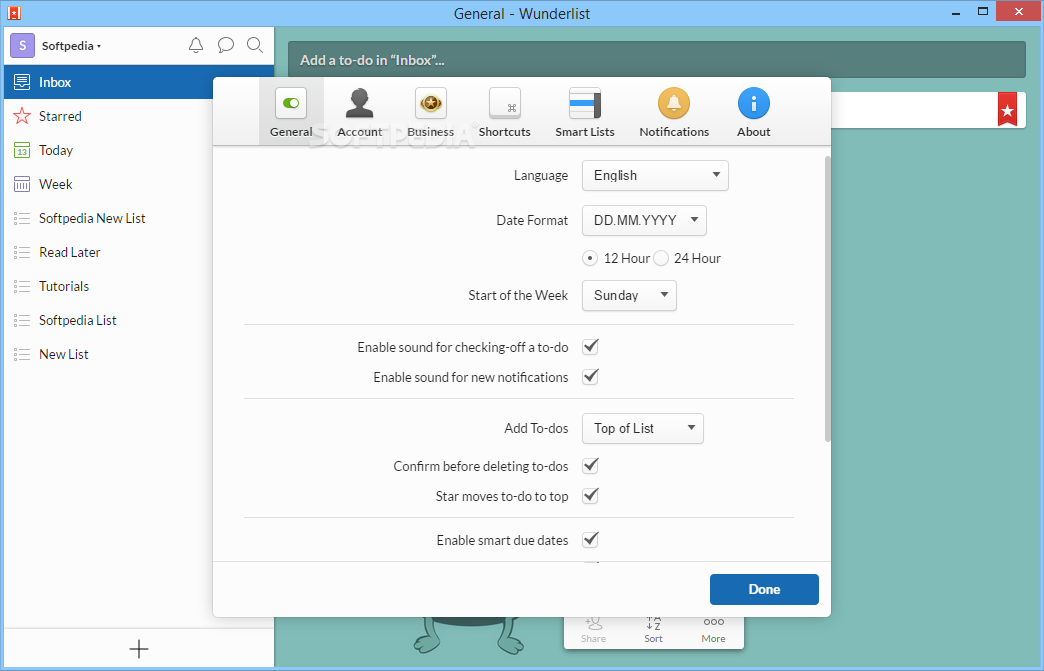 There are some great reasons to use this app. It is easy to get started and has an intuitive interface. Your home screen (on the mobile application) has a side bar. Your account and profile are at the top followed by a menu of tabs: ‘Assigned to me’, ‘Today’, ‘Week’ and ‘Home’ and others. Clicking on one of the tabs opens up a list of sub-folders. For example, within the ‘Home’ tab, you can choose to access your lists for ‘Groceries’, ‘Home To-dos’, ‘TV Shows’, ‘Movies to Watch’ and more. You may finally be able to keep track of all your friends TV and movie suggestions!

Okay, you can probably handle a shopping list for one shop but if you need to go to multiple places then sharing the workload with your family will make things much easier. Wunderlist allows you to set up collaborative lists which gives it the edge over many other applications (and your traditional pen and paper). You’ll be able to see items getting ticked off in real time. This can also be applied to your work (you can even attach files), like a simplified version of a project management application.

There are a wide variety of platforms and operating systems from which you can run Wunderlist. Wunderlist is available for download on Windows, Mac OS X, iOS devices (iPhone, iPod Touch, and iPad), and on Android phones and tablets. Many similar applications will not offer you the ability to synchronize your app between mobile and desktop. This is a really helpful option, especially when it comes to your professional life. Think of how much a web version of WhatsApp makes using the app so much easier for sharing files, photos, links and writing more and faster. Wunderlist’s multi-platform application allows you similar freedoms.

Not for now. The main issue with Wunderlist is obvious. It could be shut down any time. Microsoft have said they will do it and the official Wunderlist website is full of links to download their own version, ‘Microsoft To Do’. A big plus which has come from Microsoft taking over is they removed the paywall from the app. That means you get all the extras which were once locked away within the pro version for free. It also means many premium applications are now competing with this entirely free application. There are some great alternatives such as TickTick and Todoist but if you don’t mind making a switch down the line, stick with Wunderlist.

TickTick, Todoist, Remember the Milk, Toodledo are just a few alternatives which may work well for you (Todoist would be my top pick of these). If you are worried about Wunderlist being discontinued, then it could be worth making the move (or avoiding the move). That said, Wunderlist remains one of the most popular list-making apps and all of its once premium features are now completely free. It’s easy to use, you can collaborate on lists and use it across multiple platforms. No big, fancy upgrades will be released but security updates are still ongoing. For the time-being, if it ain’t broke don’t fix it!

Yes, download Wunderlist and make your life just that much easier to organize. Wunderlist may not be around forever, but all good things must come to an end. When the fateful day does arrive, you’ll be given notice to transfer your lists to another app. Until then, enjoy this excellent app and use its paid features completely for free.