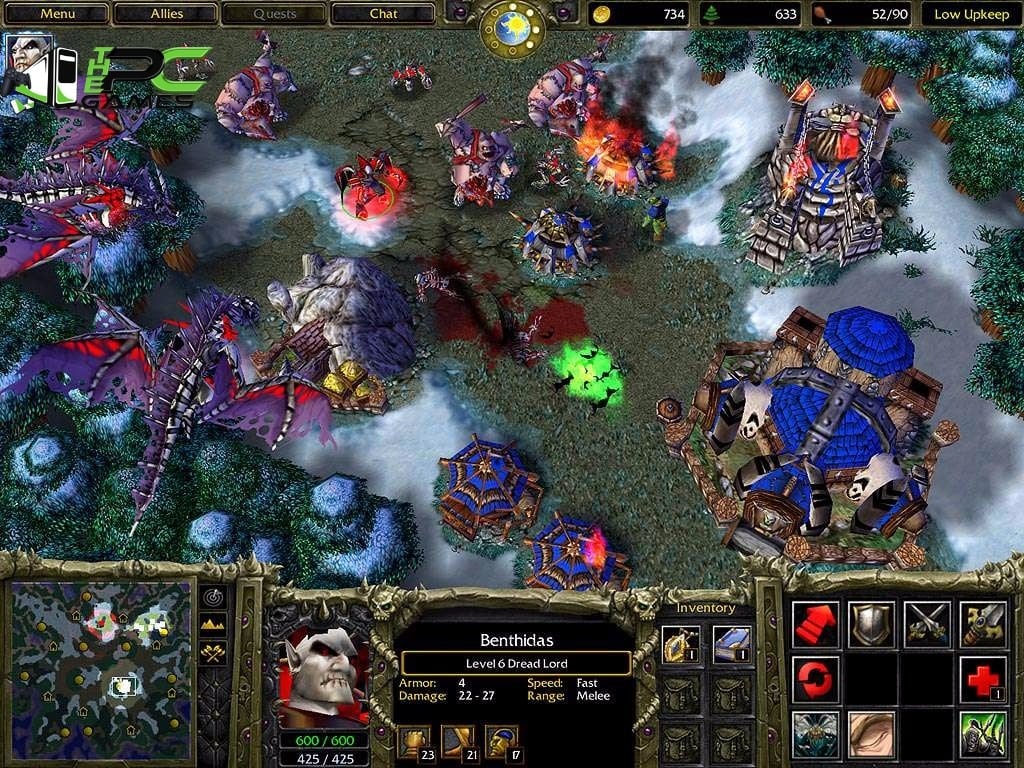 Enjoy the long awaited patch that brings Warcraft III: The Frozen Throne back into the spotlight. boasting 24-player maps, competitive balance changes and much more

There isn't a child alive that grew up in the '90s and early 2000 that haven't heard at least once about Blizzard Entertainment's Warcraft series.This then never-before-seen take on the Tolkien universe has reshaped the gaming world, spawned sequels, expansions, and MMOs that are still among the most played game today.One of the centerpieces of this franchise was Warcraft III and its expansion.Warcraft III: The Frozen Throne Patch 1.29 brings it back into the spotlight with features that make it a contender for Esports events.

The fans of this 2003 title have been begging for widescreen support ever since these devices come to a staple to what it means to have a gaming rig, so the developer delivered accordingly.To prevent stretching there have been changes to the interfaces, such as the addition of bookends to the in-game interface, or black pillars in menus.Not only did the UI get an expansive update, but so did the game lobbies themselves.They were expanded to support 24 players, and 12 new team colors were added, namely maroon, navy, turquoise, violet, wheat, peach, mint, lavender, coal, snow, emerald, and peanut.

Stepping forth into the competitive league

Ladder standings have been reset, meaning that anyone who is excited to start playing this new version will have the change for a new fresh start.Unfortunately for those that love to review old matches, they won't be able to view their replays anymore, since replays are incompatible between major game versions.One thing that Windows XP users should know is that this is the last patch to support their OS. This makes it look like they are preparing for even greater changes to the game that would otherwise be impossible to support on such an old system.

Balance changes to your favorite heroes

One major change that Warcraft III bought to the table as opposed to its 2D predecessors is the concept of 'Hero units', which are units that are more powerful than the average cannon fodder that your base produces.This patch retakes a look at these units, attempting to bring new balance changes, to further solidify their viability in competitive matches. This includes anything from mana cost changes to damage, attack speed, and movement speed tweaks.

Plenty of the previously famous maps have also received a revamp in the form of minor object placement or geography tweaks.Additionally, if you love creating your custom content, you'll be glad to know that all the maps you create via the Editor can now support up to 30,000 objects, 2048 neutral units, 384 neutral buildings, 4320 units per player, 2400 player buildings and 1024 items. Such large-scale maps would be impossible to maintain without some tweaks to the resource system, so the maximum resources have been raised from 999.999 to 9.999.999, and the maximum food limit has been raised from to 999.All these changes allow for massive player-created campaigns and maps to be truly viable now.

A breath of fresh air for all Warcraft III fans

Patch 1.29 for Warcraft III: The Frozen Throne brings just about anything a current competitive game needs, such as Widescreen support, hero balance tweaks, map updates and 24 player support. Now all that's left is to bring another patch to do a revamp of the graphics and fans won't need to ask about Warcraft IV anymore.